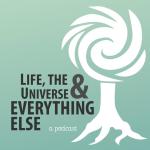 In this episode of Life, the Universe & Everything Else, Greg Christensen, Richelle McCullough, Robert Shindler, and Gem Newman continue their discussion of Star Trek’s long history of humanism, and some of the places the franchise has stumbled along the way.

Episodes Discussed: The Next Generation (The Measure of a Man, Who Watches the Watchers) | Deep Space Nine (Family Business, In the Pale Moonlight) | Voyager (Author, Author) | Enterprise (Dear Doctor)

Other Links: Riker Sits Down | Gem’s Rant on the Subject of “Dear Doctor” | Mansplainer #3: I’m Sick of Television (and Real Life) | That Mitchell and Webb Look: English Civil War